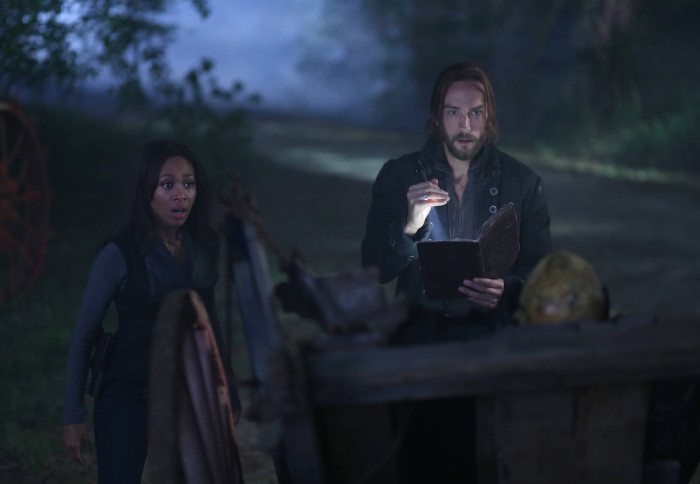 When we last left our heroes on Sleepy Hollow things weren’t looking so good. Ichabod Crane, revived after breaking a 250-year-old curse, was about to be buried alive by the Horseman of War. Elsewhere, police Lieutenant Abbey Mills, Crane’s fellow Witness to the Apocalypse, was trapped in Purgatory after trading places with Katrina, a witch who also happens to be Crane’s wife. Katrina was then promptly captured by the Headless Horseman, her former lover and current Horseman of Death, who also kidnaps Abbey’s sister Jenny.

If, after all that, you’re still with me, then Sleepy Hollow is your kind of show. Taking place in present day Sleepy Hollow, N.Y., the series is a modern-day re-imagining of Washington Irving’s classic short story with heavy dose of National Treasure-esque conspiranoia thrown in for good measure. Here Crane is an operative in the Revolutionary Army, and trusted ally of Founding Fathers like Washington and Franklin. Ostensibly, fighting for independence, Crane reveals their true battle was for the souls of all humanity.

On paper, this all sounds ridiculous, but on screen it’s a hell of a lot of fun. The show succeeds in its total commitment to the material, and never hesitates to throw itself headfirst into loopy adventures. MacGuffins, deus ex machina shortcuts, and plot contrivances abound; but where a weaker show might falter, Sleepy Hollow handles it all with deftness, confidence, and a hint of self-awareness. This is genre television at its finest.

Visually, the show is spooky, dark, and effecting. Scenes have depth and mood. Special effects, for the most part, work — no easy feat on a broadcast drama budget. The show never looks cheap or slapdash, like say, Once Upon a Time, whose CGI backgrounds border on public-access amateurism at times.

It also doesn’t hurt that the cast is excellent. As Mills and Crane, Nicole Beharie and Tom Mison have fantastic chemistry that wisely avoids the romantic. Instead the two see each other as equals and friends. Across the centuries, game still recognizes game. Even Crane’s man-out-of-time shtick is used sparingly enough to make his observations on modern life amusing, but never tired.

Supporting characters, like Jenny (Lyndie Greenwood), Katrina (Katia Winter), and Captain Irving (Orlando Jones), all get their due. The standout, however, has been newcomer John Noble, who as the Horseman of War, makes for an imposing antagonist, and a real treat for the Fringe fans out there.

It’s that strong character development that puts Sleepy Hollow” above other network genre shows like Once Upon a Time and even The Walking Dead. Both shows may draw larger audiences, but neither has a handle on its characters they way Sleepy Hollow does.

Great characters draw you in, make you invest in their stories. You root for them — or against them. It’s what keeps you coming back week after week. The best shows on TV know their characters, and know that character should drive plot not vice versa.

The show’s rollicking pace is another key ingredient. Plots that another show might draw out for several episodes of even an entire season are often dispatched inside 44 minutes. It moves at a clip that keeps the show’s oddball mythology fresh without ever leaving the viewer behind.

The season two opener, which premiered Sept. 22, is a perfect example of this steady gallop. Picking up where we left off, Crane and company are still scattered while War attempts to facilitate a demonic invasion. By the end of the episode, the day is saved, and all but of the heroes remains imprisoned. Just another day in Sleepy Hollow.

Season one’s breakneck plotting was also due to its 13-epsisode order, which prevented the show from the mid-season wheel spinning that often plagues full 22-episode seasons. This trend toward shorter seasons — which is commonplace on cable and premium channels — is slowly seeping into broadcast programming practices. While there is a tendency to milk as much you can out of a successful series, most showrunners will agree that less is more. Stories are tighter; season-long arcs don’t feel stalled or bloated.

With an 18-episode order for season two, Sleepy Hollow has more space to fill, but considering how much story the writers managed to cram into season one, they will hopefully avoid those pitfalls.

Watch Sleep Hollow Mondays at 9 p.m. on Fox. Catch up on season one on Hulu.