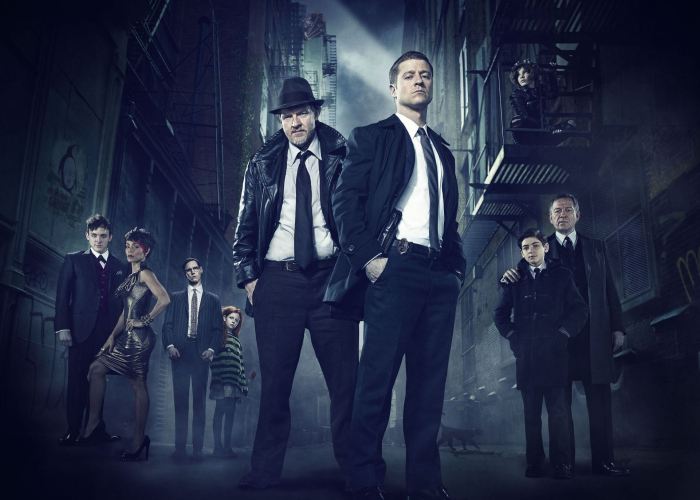 Two episodes in, and it’s still unclear exactly what Fox’s Gotham wants to be. A Batman prequel? A police procedural set in a comic book universe? A gritty character drama? Ultimately, it’s all those things, without doing any one of them particularly well.

Creator and showrunner Bruno Heller (The Mentalist, Rome) hews closely to police drama tropes throughout. It works to keep the show grounded. While this is Gotham City, don’t expect costumed bad guys just yet. It fits with the part of the show that wants to explore the character of Gotham, but the show is also both dragged down and undercut by its desire evoke some of the Christopher Nolan darkness of the Dark Knight trilogy. The result is inconsistent as the show flips between grit and humor, sometimes in the same scene. That’s not to say a show can’t be funny and dark; however, Gotham has yet to find that sweet spot.

It’s fun to imagine this show taking a cue from The Wire, and using each season to focus on a different aspect of the city — police, government, organized crime — with key characters woven in. But this is not premium cable, and from what I’ve watched so far, the series does not endeavor to be so ambitious.

Naturally, Gotham opens with the murder of Bruce Wayne’s parents. From there, it follows new Gotham City Police Department recruit Jim Gordon (Ben McKenzie) as he navigates the corrupt underbelly of a city on the edge. Gordon’s partner is typically grizzled and cynical. As Harvey Bullock, Donal Logue does fine work tempering Gordon’s do-gooder-ness, but the dynamic feels a bit tired.

That teetering-on-chaos theme comes up more than once throughout the first two episodes, as does the fact that every cop in town is dirty except for Gordon. That latter fact is hammered home in every interaction he has with his fellow officers. Everyone is apathetic, drunk, violent, or some combination of the three.

Young Bruce Wayne, played here by David Mazouz, is kept mostly on the sidelines, which is largely good. By not making him the protagonist, the show is free to stay with Gordon and the rest of the city. But while we know Bruce’s origin story well enough to let unfold in background — especially, if he’ll never actually don the cape in cowl in the series — the show could add more depth to the character than what we’ve seen so far.

Scenes with Bruce are uneventful. He broods around his big house, being dark and conquering his fears by standing on the edges of roofs and holding his hand over open flames. It’s all a heavy-handed attempt to remind us of what he’ll become.

But heavy-handedness seems to be the name of the game here. Batman’s rogues gallery is here in full effect. We may have avoided Bruce Wayne’s origin story, but it looks like we’re getting everyone else’s. Many proto-villains appear here in cameo form as the show very quickly builds out the rest of the universe. It’s a distracting bit of fan-service that felt gratuitous: a young girl named Ivy standing by a plant; a forensic scientist who speaks in riddles; a standup comic who — from the amount of screen time he was given — is either The Joker or a red herring. (If turns out to be The Joker, I’m done.)

Fortunately, there are some bright spots. Jada Pinkett Smith plays Fish Mooney, a non-canon crime boss whose scenery chewing and growling cadence channels Eartha Kitt in all the right ways. Similarly, Robin Lord Taylor is a disturbing Penguin — easily my favorite character. Ambitious, scheming and sadistic, the show should have fun developing his arc.

Also skulking (figuratively and literally) around the edges of the show is an adolescent Selina Kyle (Camren Bicondova), who, even now, has a fascination with Bruce. It’s a none-too-subtle nod to the complicated relationship these two will eventually have. Indeed, nothing is subtle about Selina, a street-hardened orphan, who tells people to call her Cat, and claws out people’s eyes. Oh, and she doesn’t like dogs. (Get it? GET IT?!)

Since pilot’s often attempt to do too much in order to snag an audience, the second episode may be a better indication of what we can expect from Gotham. The result is a mixed bag. The plot is scattered. The A-story is a convoluted child-trafficking ring involving Selina. The motives of the villains are unclear — as is their tone, which varies between camp and brutality. A scene played for a laugh ends with a gunshot to the head. In a Tarantino film, that works. Here, it falls uncomfortably flat.

While that story could have carried the whole episode, the B- and C-plots only serve to needlessly draw things out. We learn that Gordon is still refusing to “get with the program,” much to the chagrin of his corrupt superiors, including the mayor. We also check in with The Penguin who’s on a road trip, killing frat bros and stealing trucks. By the third act, I had lost all interest in Selina’s story.

Visually, the show shines. The dark color palette and tone is reminiscent of Batman: the Animated Series — a gorgeous, moody representation of Gotham in its own right. And the decision to leave the time period ambiguous was smart. It adds a timelessness, which suits the Batman universe well.

Fortunately, with 75 years of comic book stories to draw on, Gotham has much of the heavy lifting already done for it. It’s just a matter of filling in the blanks and telling new stories within an established universe while staying true to the spirit of the original text.