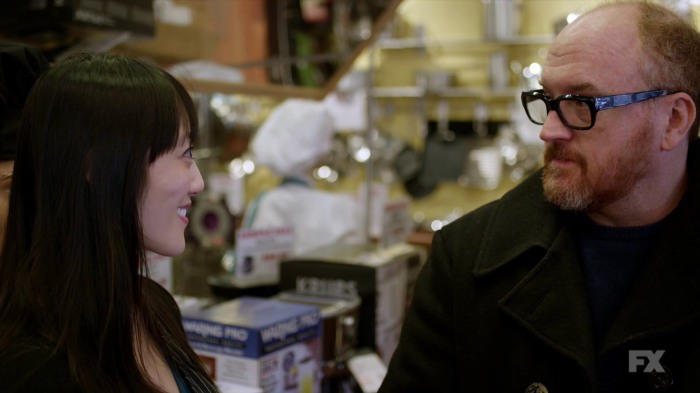 Anxiety over the death archetypal American male is nothing new. It’s a perennial concern of conservative types who see any advancement of feminist ideas as an existential threat. What these pundits refuse to acknowledge is that masculinity isn’t dying; it’s evolving. Past notions are being challenged and discarded as a new model emerges. The tension we now see manifesting in various corners of contemporary culture is that evolution in action.

On FX, comedian Louis CK has been has been exploring his relationship to masculinity and white privilege on his show Louie. Written, directed, produced, and edited by CK, the series, now in the middle of its fifth season, continues to be one of the most ambitious, thoughtful, and dramatic sitcoms on television.

Louie is an auteur comedy. Like Girls, the fingerprints of its creator are immediately recognizable. Just as Lena Dunham wrings humor and irony out of her cloistered experience as a child of privilege (in all meanings of the word), CK mines his experience as a middle-aged white man to similar, self-deprecating effect.

CK is a daring comedian. Both in his standup and on Louie, his material often skirts the line of good taste. Yet he remains ever in control. It’s this desire to push boundaries that occasionally runs him afoul easily offended types on social media where comedy is now scrutinized for any and all potential content triggers. For instance, his recent hosting of the Saturday Night Live season finale featured a gasp-inducing monologue that took on racism, the Middle East, and child molestation that immediately set Twitter on fire.

(For the record, I’m not saying holding comedians to a higher standard is necessarily a bad thing. There is a strain of lazy, indifferent comedy that is indeed offensive and, frankly, should just go away. However, the assertion that all taboo topics should be off limits is utterly absurd. The role of good comedy is not to make everyone laugh; it’s to find truth through humor. Sometimes that can be uncomfortable and even offensive. But in the hands of true masters of the craft — Lenny Bruce, Richard Pryor, George Carlin — that ugliness was deployed in service of revealing a deeper truth about the human condition.)

Throughout Louie, CK’s fictional self is a good guy with good intentions struggling to navigate the minefield of modern society. But rather than merely serve himself up as the butt of the joke, like Larry David on Curb Your Enthusiasm, CK dives in and unpacks the root causes of his anxieties. In doing so he demonstrates a self-awareness of his privilege and a willingness to confront it head on without moralizing.

In this season’s third episode, Louie engages Millennials when he takes offense to a young storeowner’s dismissive attitude toward him. Initially, it looks like Louie is going for easy “kids these days” joke, setting himself up as the sanctimonious elder whose wisdom should be indulged. But CK quickly flips the script as the woman puts Louie on his heels. The scene concludes with both agreeing, “if you feel stupid around young people, things are going good.”

It’s an unexpected turn that demonstrates how much CK is in conversation with himself on Louie. In each episode, you can see the wheels turning in his head as he works out certain ideas, fears, and biases onscreen. The results are often uncomfortable and always fascinating.

Season five is a continuation of dramatic tone that dominated much of season four. Louie is a comedy first, but it has never shied away from taking dramatic turns. With such exceptional creative freedom, CK stretches the sitcom genre to its limit with inventive storytelling that is funny, moving and weird. Even when the show stumbles, it doesn’t disappoint.

CK’s cinematic tendencies are ever present. Episodes unfold like short films with artistic flourishes not normally seen on a basic cable sitcom. The series’ loose continuity also liberates CK to follow his muse without concern for any greater narrative cohesion. Story arcs can last any where from five minutes to five episodes.

In recent years, CK has risen to become one of comedy’s most unique and respected voices. He is a comic who he speaks his mind with awkward candor as he offers a progressive point of view on his experience of male privilege while still challenging audiences with his daring material.