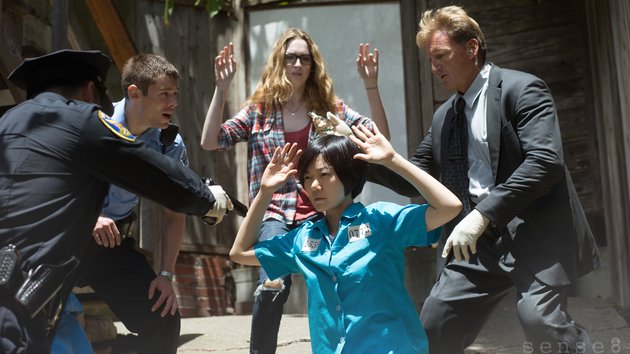 Full disclosure: I’m not a big Wachowskis fan. The Matrix was good, but for me it was hardly transcendent, mind-blowing experience it was for so many others. When it first premiered in 1999, I appreciated its visual mastery, but couldn’t connect with the story. It wasn’t a groundbreaking epistemological treatise. It was freshman-year philosophy. It was the “Allegory of the Cave” with bullets.

Sense8, the Wachowskis’ new TV series, which premiered on Netflix earlier this month, is similarly hollow despite its beauty. Directed by the siblings and co-written with J. Michael Straczynski (Babylon 5, a ton of Marvel and DC comics), the show is a sci-fi thriller centered on a group of eight disparate individuals who suddenly become mentally and emotionally linked. Called Sensates, this linkage allows individuals to access the knowledge and skills of anyone else within their cluster.

Visually, Sense8 is a stunner. Spanning the globe as it follows its scattered cast, it takes the opportunity to present some truly gorgeous backdrops via sweeping aerial and tracking shots. There is an overall crispness and saturation of color here that makes scenes pop.

Unfortunately, there’s not a whole lot happening beneath the surface. This is a show that’s trying to do a lot of things, exploring a number of social issues typically glossed over by sci-fi and genre television, such as race, sexuality, gender, religion, and politics. It’s a noble effort that is executed with earnestness; however, these issues are rushed or underdeveloped as the show tries to cover them all. The result feels like the show is ticking off boxes without unpacking these ideas in a meaningful way.

The best way to introduce a cast this big is to just list them. There’s Will (Brian J. Smith), a Chicago cop with a haunted childhood; Nomi (Jamie Clayton) a socially conscious hacktivist and trans woman in San Francisco; Riley (Tuppence Middleton), a traumatized Icelandic DJ; Capheus (Aml Ameen) a van driver with a hero’s heart in Nairobi; Sun (Bae Doona) a Korean businesswoman and kickboxer burdened by her patriarchal family; Kala (Tina Desai), a pharmacist and devout Hindu living in Mumbai; Wolfgang (Max Riemelt), a German safecracker and noble-ish criminal; and Lito (Miguel Ángel Silvestre) a closeted telenovela star in Mexico City.

The cast is as diverse as anything you’ll see on TV. They are also all solid actors, who manage to make their at times thinly drawn characters interesting and even compelling. To be sure, large casts are hard to juggle. Shows like Lost managed it especially well (except when it didn’t). Sense8, however, has to cover so much ground — both geographically and narratively — that characters tend to feel one note as they are reduced to the a single aspect that makes them valuable to a particular episode’s plot or theme: Sun’s a fighter, Nomi’s a hacker, Lito’s gay, etc.

Later episodes have fun with the hive mind concept as the cluster gets better at working together, making for some dynamic scenes as characters tap in and out as needed. Sun replaces Capheus in a fight scene as she lends him her skills; Nomi feeds Will information as he runs a rescue mission; and so on. These shared scenes are a lot of fun, and mange to create intimacy within the group despite the fact that only two of the eight characters actually meet in person during first 12 episodes.

At just a dozen episodes, Sense8 is fairly easy to marathon. The pilot is a slog though. I promise that subsequent episodes get better (relatively speaking), but this show is painfully slow out of the gate as it sets the table and introduces both the premise and all the players.

Things start to click around episodes three and four as the show settles into a rhythm; however, the plot doesn’t really take off until the last couple episodes as we learn just what Sensates are and why they are being hunted. The show’s mythology will likely get unpacked more in season two, but as it stands now, it’s a little too vague.

While not a lot happens in season one, Sense8 is worth checking, especially if you’re a fan of the Wachowskis’ work. This is with an interesting concept with a lot of story potential. It remains to be seen, however, if this creative team can tell a story as captivating as the visual world they have built.