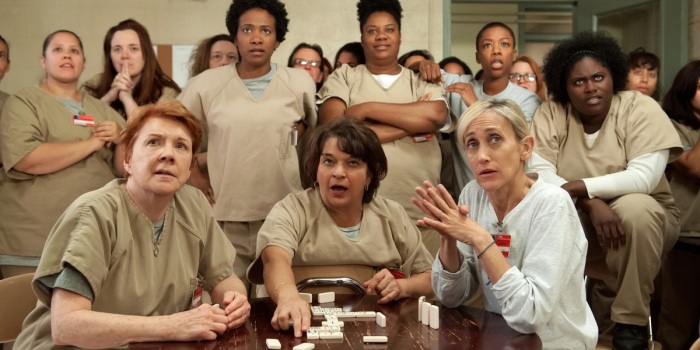 After a second season that felt like a bit of a slog, Orange is the New Black has delivered a third that reaffirms everything I love about this series. It was funny, smart, poignant, and, at times, gut wrenching — often all within the same episode.

The balance between comedy and drama has often been a struggle for the show. Occasionally, the speed with which it whips back and forth between the two can be jarring, not giving either enough room to breathe.

Season two, while solid on both story and character development, suffered from such an imbalance. The result was high on drama and divisiveness, with the various tribes of women within Litchfield closing ranks as they found themselves in constant conflict.

Nearly all of this conflict was due to the Vee storyline. To be sure, Lorraine Toussaint was fantastic as the villainous mother hen of the black inmates whose machinations brought a sinister air to the season. Nonetheless, her presence loomed too large at times pushing much of the rest of the cast to the margins as she imposed herself on the prison community.

In season three, showrunner Jenji Kohan does a lot of work to repair the damage done by Vee. The community feels more cohesive than ever. The racial tribalism is less prevalent as in previous seasons as disparate characters connect to form unlikely friendships and alliances.

One example is the continued deepening of the friendship between Boo (Lea DeLaria) and Doggett (Taryn Manning). In season one, the idea that the butch lesbian and evangelical meth head would find common ground would have been laughable. Indeed, their friendship could still play as ridiculous. But the show has allowed this connection to develop organically as we have come to understand more about the two.

A major theme that runs throughout this season of OITNB is motherhood. From the premier forward, we see mother-daughter relationships of all sorts. Many of this season’s flashbacks show us glimpses of characters with their mothers. Through them we get a sense of what set these women down the path that eventually landed them in prison. Many of thee mothers are absent, abusive, negligent, cold, or unloving.

For the still pregnant (?!) Daya (Dascha Polanco), this reality weighs heavily as she decides whether to give her baby away. Is a mother’s love more important than money and the promise of a comfortable, stable upbringing? Will her child just be another doomed kid in the system if she keeps it? Daya’s decision is only complicated by her own mother and fellow inmate, whose behavior in the situation is both despicable and loving. While my interest in this storyline has waned since season one (seriously, this woman has been pregnant FOREVER), Kohan did manage to give it new life.

Tastee (Danielle Brooks), meanwhile, finds herself as the unwitting heir to Vee’s throne as surrogate mother to her band of inmates. Brooks has been a shining, delightful star of this series, with last season doing a lot to flesh out her character through her complicated relationship with Vee. Now, as she finds herself in a position of authority, she remains true to her character as she exercises her power with love, compassion, and diplomacy.

Ostensible protagonist Piper (Taylor Schilling) is still the worst, but this season has managed to make her much more tolerable. Part of the improvement is simply because we are spending less time with her as other characters’ stories have increasingly taken center stage. In a diminished role, her character becomes much more palatable, if still unlikable.

Prison has not so much broken Piper’s insufferable sense of privilege and selfishness as it has redefined it. Early on she confesses her culpability in Alex’s (Laura Prepon) parole violation that landed her back in prison, admitting her need to have Alex back in her life. It’s a betrayal that hits hard, but is not necessarily any worse than the one Alex committed that sent Piper to jail in the first place.

But when Alex finds herself in a vulnerable position, Piper is unavailable. She’s the type of person who defines the terms of her relationships. When those terms change, she loses interest and withdraws.

Piper’s creation of a gross yet lucrative underground business, meanwhile, sees her capitalizing on her white-girl privilege as she rapidly emerges as a criminal boss depsite Alex’s warnings. Here again, Alex finds herself on the outs as soon as she rejects Piper’s scheme.

Sophia (Laverne Cox) gets a powerful arc this season as the Kohan uses her character to dig into the issue of transphobia. So far Sophia has gotten as pass as the sole trans women in a women’s prison. Her status as the amiable hairdresser, style maven, and gossip has helped her fellow inmates overlook her physicality.

However, when a series of incidents puts her on the offensive, she becomes a threat and a target. Cox really digs into the material, illustrating a very real and timely issue to great effect. The inability and unwillingness of the prison to address the matter is revealing and heartbreaking.

Indeed, the business of running the prison gets a lot of attention this season as Caputo (Nick Sandow) makes a last-ditch attempt to keep Litchfield open by turning it over to a private contractor. It’s a telling look behind the curtain of the industry. This is how many prisons in the US are managed, and it’s abhorrent.

In these boardroom scenes, we see wealthy white businessmen deciding the fate of faceless minorities with spreadsheets and expense reports. The idea that bottom line is more important than human life and dignity is all but explicitly stated. What incentive does a company that profits off of managing prisons have for reducing inmate populations or recidivism? None.

Caputo, who has had one of the best character arcs of the series, is further fleshed out as a good man whose heart bleeds almost to a fault. All his life he has done the right thing, and at almost every turn he has suffered for it professionally and personally. This season sees him wavering between doing what best for him and doing what’s best for his employees and inmates.

Flashbacks, which have always been a central narrative device, are tighter this season. Instead of spending half an episode digging into a character’s past, we get quick hits depicting a specific moment that informs what is happening in the present. While the longer flashbacks were never a major problem — though they did drag at times — this approach is much more effective, adding an extra punch to characters’ stories. (See: Poussey’s flashback in “Mother’s Day.”)

Season three is bookended by a pair of episodes that are among the series’ best. “Mother’s Day,” the season opener starts out upbeat as the inmates’ families visit their incarcerated mothers. Much of the episode is an attempt on the part of the inmate and families to forget their surroundings if even for a couple hours. Reality abruptly crashes the party, however, when a lost child puts the prison on lockdown forcing all the inmates to hit the ground. The humiliation and fear of the situation is heartbreaking.

By contrast, the finale, “Trust No Bitch,” is all hope and sunshine as the series presents one of its most surreal, beautiful, and optimistic scenes. But while the season goes out on a joyful note for most, several characters are still left in dire situations, leaving some major plots dangling heading into season four.

In many ways, season three felt like something of a reset for Orange is the New Black. After the tense situations and heavy conflict of season two, it makes sense that Kohan would use this season to take a breath, return to center, and explore new stories moving forward.