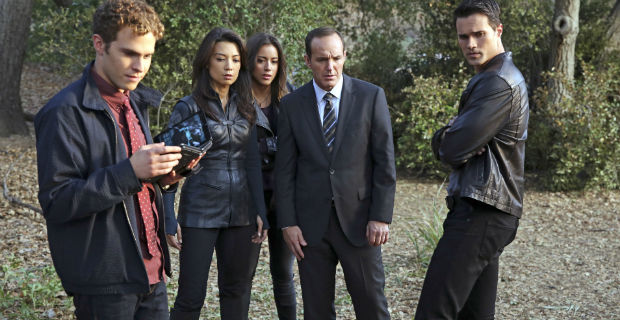 Editor’s note: This review contains major spoilers for both Marvel’s Agents of S.H.I.E.L.D. and Captain America: The Winter Soldier.

Marvel’s Agents of S.H.I.E.L.D. just wrapped its first clunky, wildly uneven season last night with a strong finale that sets up a number of interesting stories for season two. While much of this season has been a chore to watch — too little characterization, too many uninteresting stories, too much messy action — everything locked into place for the back third of the run and things got exponentially more interesting and fun.

This major shift is thanks almost entirely to the release of Captain America: The Winter Soldier, which revealed that S.H.I.E.L.D. had been infiltrated by the quasi-Nazi terrorist group Hydra. The film’s ramifications for Agents of S.H.I.E.L.D was immediate and massive, upping the stakes and building the kind of suspense the show had been missing for the first 16 or so episodes.

The show’s writers also deserve some of the credit. For much of the season, the characters were just plain dull. Aside from Coulson’s (Clark Gregg) determined leadership and goofy enthusiasm for his job, and the quirky uber-nerd chemistry between FitzSimmons (Iain De Caestecker/Elizabeth Henstridge), the rest of the cast was a bore — Skye (Chloe Bennet) was nothing more than a sexy MacGuffin; Ward (Brett Dalton) was the least interesting secret agent ever; and May (Ming-Na Wen) was an underdeveloped ass-kicker. But once the stakes were raised with the Hydra threat and the team begins to fracture due to mistrust and betrayal, everyone took on some much welcomed layers depth and complexity.

As a TV show, Agents of S.H.I.E.L.D is peculiar thing: a series married to a multi-billion-dollar film franchise that ABC (owned by Disney, which also owns Marvel) uses as a weekly infomercial for its films. Corporate synergy aside, it’s actually a decent that, if done well, will have fanboys/girls eating out of your hand. The back end of this season proves it.

But the other side of the coin is that the show has it’s hands tied. The Marvel toy box is huge, but the Marvel Cinematic Universe gets all the cool toys. That’s not to say the show gets the short end of the stick. There are still plenty of characters and concepts to explore. However, Agents of S.H.I.E.L.D must follow the MCU’s lead, and allow them to make the big reveals and do the heavy lifting when it comes to universe building.

I have to wonder if so much of this show’s structural and plotting problems would have been resolved if it had premiered as a 12-episode season in January or February. A compressed season that led us right into the Hydra conflict and its immediate aftermath would have made for a stronger season.

Heading into next season, Agents of S.H.I.E.L.D. is in a good place. Enough interesting plotlines have been left dangling to hopefully tell some fun stories. Nick Fury has tasked Agent Coulson with rebuilding S.H.I.E.L.D. Fits is in a coma; Skye’s father is alive (and scary); Deathlok is on a quest to make amends for his sins; and that hunk of gravitonium is still out there — as are a bunch of supervillain prisoners who escaped during Hydra’s ransacking of S.H.I.E.L.D.’s bases. Plus, there’s that alien (Kree?) goo swimming around inside Coulson and Skye, and it may be starting to have an effect on Coulson. It all enough to bring Marvel fans back to see where this is all headed.

Season two will also be bookended by Guardians of the Galaxy this August and the Avengers sequel next May, which puts the show in both an interesting and difficult place narratively. GOTG should leave some cosmic crumbs for Agents of S.H.I.E.L.D to pick up and possibly incorporate into both the T.A.H.I.T.I. project and Skye’s origins. But depending on what set to happen in Avengers, next season may suffer from more delayed exposition and episode padding ahead of the film’s May 1 release. (Let’s hope not.)

While this first season of Agents of S.H.I.E.L.D. has had more downs than ups, the final few episodes show promise. After all, this is a Joss Whedon series — somewhat notorious for shaky first seasons that lead to stronger subsequent ones. And while Whedon himself isn’t as involved as we’d all hope, he’s assembled an able team in his brother Jed and Maurissa Tancharoen. As the Marvel universe continues to expand on the big and small screen Agents of S.H.I.E.L.D. has many potential directions in which to go — but it’s unlikely down will be one of them.