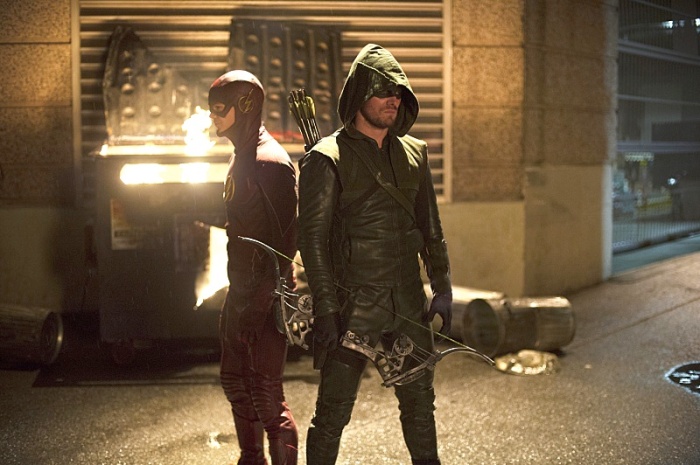 [Editor’s note: A version of this review appears in an upcoming edition of the Rutland Reader.]

In the cosmic arms race of comic book blockbusters, Marvel has DC beat by a mile. Since 2008, the House of Ideas has been steadily building a cohesive cinematic universe of nearly a dozen films that have been popular with audiences and critics alike.

Time will tell if DC/Warner will be able to replicate Marvel’s cinematic success. With the March 2016 release of Batman v. Superman: Dawn of Justice, Warner Bros. will begin a five-year run of films that will bring a number familiar heroes to the big screen.

It’s a big gambit considering Warner’s superhero track record. With the exception of Christopher Nolan’s Dark Knight trilogy, the modern films based on DC characters have varied from dull (Superman Returns) to downright silly (Green Lantern). Even 2013’s Man of Steel, which was received more or less favorably, was dour, ultraviolent, and lacking in any of the optimism that a hero like Superman represents.

On the small screen, however, DC is having a better go of it. Arrow and now The Flash have proven that, in the right hands, these characters can be interesting, exciting, and fun. Under showrunner Greg Berlanti, both series blend action and drama to create two tonally distinct yet narratively compatible products.

Indeed, stylistically Arrow in particular has outpaced Marvel’s Agents of S.H.I.E.L.D. Since its 2013 premiere,Agents of S.H.I.E.L.D. has been rather meh. Much of the first season was a downright bore. Fortunately, the show’s status quo shakeup in the wake of Captain America: Winter Soldier helped to inject some much needed energy. By linking the show more directly to the cinematic universe, Marvel upped the stakes giving it a much-needed sense of purpose. Consequently, season two has been far more satisfying.

However, that linkage is also what holds the show back. Major characters and big reveals are off limits.Agents of S.H.I.E.L.D. gets to fill in the spaces between while the films do all the heavy lifting. The result is a show that, while often enjoyable, lacks a distinct style or voice of its own.

That’s not to say showrunners Jed Whedon and Maurissa Tancharoen couldn’t take a page from a show like Alias and make things more exciting visually by pushing their directors to take more risks. When they have, it has paid off. They just need to do it more often.

Part of this is a practical matter: making the series too stylized or idiosyncratic risks competing with or crowding out the films. Marvel films have successfully employed disparate genres — spy thriller, fantasy, comic action — under its ever-widening umbrella. As the connective tissue for its cinematic universe, Agents of S.H.I.E.L.D.” seems to be under a mandate to keep it simple and not too flashy. As such, it’s a workhorse: a dependably entertaining but only occasionally thrilling hour of television.

Arrow and Flash, meanwhile, show no such restraint. Not beholden to the demands of a collective cinematic universe — though, they do share one of their own — the shows are free to play with all the toys in DC’s box. (Except Batman and Superman, those guys are reportedly off limits.

In its third season, Arrow has slowly gained steam, getting better with each season as billionaire playboy Oliver Queen settles into his role as Starling City’s masked vigilante. From the beginning, the series was dark and often violent, if not overly graphic. Early on, the show’s brooding tone was a bit much, but it has gotten better at tempering the gloom with occasional moments that almost border on levity.

Arrow is best when it dispenses with the soap opera drama, of which there is a lot — the show is, after all, on the CW — and gets to the action. Fight scenes are well choreographed, and the direction is almost always on point. This is in stark contrast to Agents of S.H.I.E.L.D., whose action sequences are surprisingly bland for a series full of super spies.

Meanwhile, Flash, which debuted earlier this fall, has a noticeably lighter tone. Central City is bright and clean, a sunny paradise compared to the perennial war zone of Starling City. It helps that Barry Allen, a.k.a. The Flash, is a happier character, who relishes his powers and newfound ability to save the day.

While still early in the show’s inaugural season, Flash is off to a strong start. It succeeds as an upbeat companion to Arrow, adding a bit of optimism to an otherwise pessimistic world. As The Flash/Barry, Grant Gustin has yet to capture the heroic spark that has made Stephen Amell’s Oliver/Arrow such a compelling character, but he shows potential, and is affably awkward as a newbie superhero.

The supporting team is a mixed bag. Tom Cavanagh as the morally ambiguous Harrison Wells, and Jesse L. Martin as Detective Joe West, Barry’s adoptive father, both do great work here. The rest of the gang, specifically Flash’s nerd squad support team, feels more stock, but that may change as the series continues to develop them.

However, these shows are not without their faults. The aforementioned CW soapiness can be a drag. Arrow spends way too much time on its characters pining for someone else, or just being angsty in general. I’ve done my share of Liz-Lemon-level eye rolls watching this show. Your mileage may vary. I’m not a shipper. I’m not opposed to romantic subplots when they are organic. I just don’t like them shoehorned into a series just for the sake of having one to create drama or play for cheap emotional beats.

More problematic, however, are the female characters in both series, who too often fall into the role of damsels in distress, potential sex partners, or, more often, both. In Arrow and Flash, the use of secret identities is justified in order to keep loved ones (always female) safe. On its face, the motivation is noble. But the secret identity has always been a clunky and ridiculous plot device. (I’m looking at you Peter Parker and Clark Kent.)

Here it’s also blatantly paternalistic. It strips all agency away from the women and their ability to defend themselves. Flash is especially egregious here, though so was Arrow early on. Almost everyone on the series, including several villains, knows Barry Allen is the Flash yet he still goes to great lengths to make sure his beloved Iris never knows because then she’ll be in danger even though she already is every other week. Ugh.

And I reject outright The Arrow’s assertion that being a hero means you can never find love because that will only put that person in harm’s way. He actually gives this advice to Barry in a recent episode. As a seasoned hero, Oliver Queen certainly has a lot of wisdom to share, but he should have kept this nugget to himself.

At least on Arrow the women have a bit more to do — Sara, Shado, and Helena all kick ass and can hold their own against any man, Arrow included — but every damn one of them has slept with Oliver. Even Felicity Smoak, Oliver’s brilliant hacker girl Friday and the most fleshed out female on the series, is in love with him.

Then there’s Laurel Lance, possibly the most imperiled woman in all the DC multiverse. She’s supposed to be bold and plucky, but in the hands of the show’s writers she’s foolhardy and overly emotional. In what could have been a strong character arc in season two, Laurel develops a substance abuse issue as a result of the repeated traumas she has endured. As a story, it makes a lot of sense. You don’t often see the real-world consequences of being in the middle of a superhero comic brought to life.

Unfortunately, the show squanders the story’s potential by playing it too broadly. Every time Laurel reaches for a glass of wine or pops a pill, the camera makes sure we notice. What should have been a slow burn quietly building over a season, blows up in a handful of episodes. Of course, Oliver and Laurel’s father intervene, because we all know the first step to sobriety is finding a man to take you to AA.

Laurel’s treatment thus far on the series spells trouble for her coming transition into a badass vigilante. It’s going to be hard sell, for me at least, to buy her as a competent hero when I know the flawed character behind the mask.

Agents of S.H.I.E.L.D. has no such issues with its female characters. The reason is twofold. First, this is the Whedon-verse, a place where women typically have more agency, and rarely need a man to save them.

Second, the characters on the series have always been somewhat thinly drawn. Some relationship dynamics have been explored, but the show is more concerned with saving the world than fretting over who likes whom.

Arrow and Flash may be more problematic, but that’s partly because they can and do take bigger risks with their characters, and are willing to dig deeper into relationships, romantic or otherwise. That said they don’t get a pass just for swinging big.

A more disciplined show on a less soapy network could manage these female characters much better. Here, it seems both shows are content to play within the classic superhero trope of damsels in distress who always fall for men in masks. For teens looking for tumblr fodder to swoon over that’s great, but for older viewers who prefer a more sophisticated stories, it detracts from two otherwise enjoyable shows.

Still, for all their flaws, Arrow and Flash get a lot right. Both shows feel like comic books brought to life. The action is big, the stakes are high, and, for better or worse, the emotions are dialed up to 11. They may not be perfect, but they’re still a lot of fun.