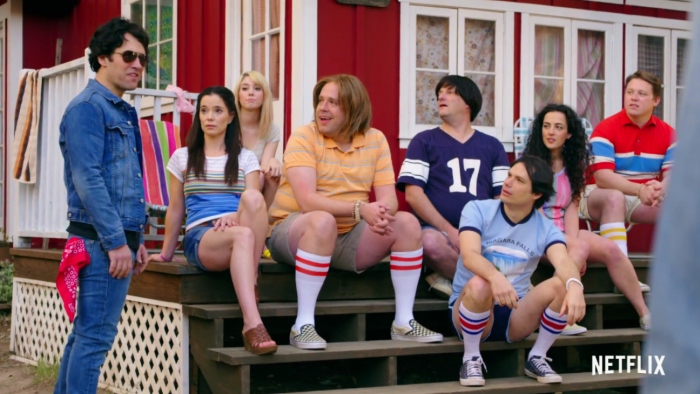 When Wet Hot American Summer arrived in theaters in the summer of 2001, nobody noticed. Despite its subsequent cult status, the parody of 1980s summer camp films, written by a pair under-the-radar comedians from MTV’s short-lived sketch show “The State” and starring a handful of relatively no-name actors, lacked star power and was just weird enough to scare off critics at the time.

Nearly 15 years later, the comedic legacy of WHAS is difficult to understate. The film’s oddball sensibilities that critics gave the side-eye to in 2001 are now very much the mainstream. And many of the film’s stars went on to create some of this decade’s most inventive comedy. That’s to say nothing of Bradley Cooper, Elizabeth Banks and Paul Rudd, all of whom were virtual unknowns at the time. (Fun fact: this was Cooper’s first film; he had graduated from college weeks before shooting began.)

Given the length of time since its release and the career trajectories of much of the cast, any sort of sequel to WHAS seemed unlikely. Even at a time when sequels, prequels and reboots rule the land, the arrival of Wet Hot American Summer: First Day of Camp was an unexpected surprise.

Released on Netflix last month, the series reunites the entire original cast, along with a horde of new faces, for a single-day adventure told across a madcap eight episodes. The events of the series take place five weeks before the 2001 film; a detail the show winks at when a character says they’ll have so much fun everyone will feel 15 years younger by summer’s end.

Despite that decade-and-a-half gap, the cast has aged well. (Paul Rudd might actually be a vampire.) Only co-writer and star Michael Showalter looks worse for the wear. Reprising his role as Coop, the closest thing to a central character this sprawling series has, Showalter is decidedly heavier and sporting a deliberately terrible wig here.

Such incongruities, however, only add to the humor. This is a universe where logic holds no sway. Like the film, First Day of Camp is unbridled silliness and controlled chaos that knows exactly what it wants to be. Co-writers David Wain and Michael Showalter (Wain also directs every episode) once again explore summer camp movie tropes and 1980s references with an eye toward the absurd.

Case in point: A ruthless, jellybean-chomping President Reagan (played surprisingly well by Showalter) shows up for a couple episodes when Camp Firewood gets embroiled in a toxic waste dumping scandal.

The series digs deeper into its universe as it builds a mythology. Throwaway lines and minor characters from the film are unpacked and explored in detail here. Both Elizabeth Banks’ Lindsay and Jon Benjamin’s can of vegetables (a.k.a. Mitch) get full backstories here. We also get Gene’s (Christopher Meloni) origin story, and finally find out just who Beth’s (Janeane Garofalo) friend Jim Stansel is.

We also take a trip across the lake to rival Camp Tigerclaw, where the rich kids conspire against our heroes. Josh Charles (The Good Wife) rocks the triple-popped collar as ringleader Blake, while Kirsten Wiig gets to break out the crazy eyes as Courtney, another wealthy camp counselor.

Wain and Showalter manage to get the most out of this cast, considering its size and limited availability. Unlike season four of Arrested Development, which was forced to isolate its characters and their stories because of similar shooting difficulties, First Day of Camp keeps everyone in the mix as best they can. While Cooper and Banks don’t get quite as much screen time as some of their less busy fellow cast members, their appearances are evenly spread so they never are noticeably absent.

Even with this cast of ringers, First Day of Camp still falls into that category of weird comedies that are not for everybody. On the surface, much of this humor is dumb, but executing this sort of stupidity requires intelligence. A scene in one of the final episodes where Beth attempts to understand the twisted logic behind one of the season’s many subplots doubles as a message to the audience: none of this makes sense, but don’t worry about it.

Revisiting beloved films and series is always risky. For every Better Call Saul there’s an AfterMASH. Fortunately, First Day of Camp succeeds, by remaining faithful to the film without excessively retreading old jokes. The result actually enhances the original, by adding more depth and humor to an already hilarious story.